Last weekend, Blackpool began their League Two campaign as they begin their attempts to climb back up the football ladder following two successive relegations. Ownership problems have led to multiple fan protests, and it’s a whole world away from the 2010-11 season when they were playing in the Premier League. Six years ago they kicked off their first top flight campaign since 1971 with an incredible 4-0 win over Wigan Athletic.

The Tangerines were 3-0 up by half-time at the DW Stadium, thanks to Gary Taylor-Fletcher’s goal and a Marlon Harewood double. After the break, Steve Gohouri had a header disallowed for Wigan before Alex Baptiste’s cross inadvertently added Blackpool’s fourth. But where are the 11 starters and three substitutes now?

Signed a new contract after Blackpool were relegated, and stayed at Bloomfield Road until 2014 when he joined Burnley, who had just been promoted to the Premier League, on a free transfer. However being back-up to Tom Heaton meant that Gilks was limited to just two League Cup appearances in two years with the Clarets before joining Rangers this summer. A week after keeping a clean sheet against Wigan, Gilks was called up to the Scotland team for the first time, but did not make his debut for his country until 2012.

One of the most unlikely scorers in the game, Alex Baptiste left Blackpool for Bolton Wanderers in 2013 on a free transfer like Gilks. He spent just one season with the Trotters before they loaned him out to Blackburn and eventually sold him to Middlesbrough last summer for free. However, he is yet to make a competitive appearance for the new Premier League side after suffering a suspected double leg fracture in pre-season 2015. He spent the last two months of last season on loan at Sheffield United and is now hoping to make an impact in the top flight again with Boro.

Evatt was the only ever-present player in Blackpool’s 38 Premier League matches during the 2010–11 season, and became the club’s longest serving player in 2012. He left Bloomfield Road the following year, returning to Chesterfield where he played between 2003 and 2005. In his first season, the Spireites won the League Two title, with Evatt still featuring regularly for the club aged 34. He is now vice-captain.

Only 21 years old at the time of the 4-0 win, Manchester United youth product Craig Cathcart still had his whole career ahead of him, and continued to play for Blackpool until his contract ran out in 2014. He then joined Watford, scoring on his debut for the Hornets before playing a crucial role as they won promotion last year. Cathcart missed just three Premier League games in 2015-16. Less than a month after the Wigan game, the defender made his Northern Ireland debut and now has 24 caps, being included in their Euro 2016 squad.

Following Blackpool’s relegation, Crainey put pen to paper on a new contract, Blackpool putting in a ‘big offer’ to help the defender snub the interest of Wigan, ironically. However, he did end up moving to the Latics on a free transfer in 2013, but lasted just a year at the DW Stadium before joining Fleetwood Town. It was another short spell at the League One club, with Crainey then signing for non-league AFC Fylde who lost in the play-off final of the National League North last season. 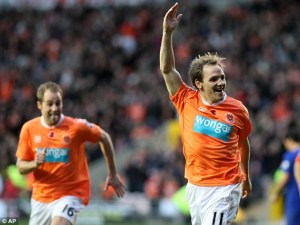 One of the better players in Blackpool’s team, David Vaughan wanted to remain in the Premier League after the Tangerines went down, so was snapped up by Sunderland in 2011. He made 46 league appearances over the following two seasons, and was then loaned to Nottingham Forest in October 2013, later extending his spell at the City Ground until then end of the season. The midfielder made the switch permanent in the summer of 2014, and remains at Forest. He was also part of the Wales squad that reached the Euro 2016 semi-finals, but didn’t get on the pitch.

The captain and easily biggest name in the Blackpool squad, Charlie Adam got a high-profile move to Liverpool following Blackpool’s relegation, with the Reds paying just under £7 million for him. However, despite winning the League Cup, it never quite worked out at Anfield for the Scot, and he transferred to Stoke City just one year later for around £4 million. Adam, now 30, has made 109 league appearances for the Potters since, and fans will remember his superb goal against Chelsea from inside his own half last year.

Scorer of Blackpool’s first ever Premier League goal, Gary Taylor-Fletcher was yet another player let go for free when his contract expired in 2013. He was picked up by Leicester City and played 21 Championship games for the Foxes as they earned promotion to the Premier League. Taylor-Fletcher would make just one top flight appearance though before being loaned first to Sheffield Wednesday and then Millwall in 2014-15, but was unable to score for either club. Last summer he joined National League Tranmere Rovers.

The only player to score in all of the top four divisions for Blackpool, Brett Ormerod was in his second spell with the Tangerines in 2010, and stayed at Bloomfield Road until 2012. Since then, it’s been quite a descent down the leagues, first joining National League Wrexham (where he won the FA Trophy) before playing for Padiham and then Bamber Bridge in the Northern Premier League Division 1 North (eighth tier of English football). Despite continuing to score, Ormerod hung up his boots in January aged 39. 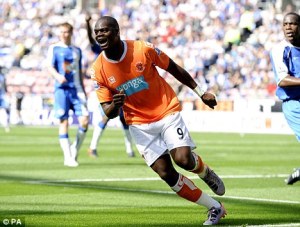 To be fair to Marlon Harewood, he was pretty decent in his prime for West Ham and Nottingham Forest, but after leaving Blackpool in 2011 following relegation, he’s become a bit of a journeyman and hasn’t hit the back of the net that often. Now 36, his career since Bloomfield Road has taken him to Barnsley (on loan), Guangzhou R&F (China), Nottingham Forest, Barnsley (again), Bristol City, Hartlepool United and currently Nuneaton Town, who play in the National League North.

Elliot Grandin was signed upon Blackpool’s promotion, but didn’t have the best of spells with Paul Ince criticising him of wasting his talent before releasing him in 2013 following an unsuccessful loan spell in his homeland with Nice. Crystal Palace signed him up, but he never made a Premier League appearance for the Eagles as his contract was cancelled by mutual consent six months later. Grandin then returned to Blackpool but again failed to make the grade, moving to Romanian side Astra Giurgiu for the 2014-15 season. Just 18 months later he was back in England as Shrewsbury Town gave him a short term contract but released him without even playing him. Kept up? That leaves the Frenchman as a free agent, still only 28.

A former Barcelona player signed upon Blackpool’s promotion, midfielder Sylvestre came on in the 59th minute to replace Ormerod. He spent three years with the Tangerines and became a fans favourite, but was let go for free to join Turkish side Caykur Rizespor. The Frenchman, now 32, was released at the end of 2015-16 so is currently a free agent.

A replacement on the hour mark for Harewood, Basham was also making his Blackpool debut that afternoon, but it would be just one of his two Premier League appearances that season. The midfielder stayed at Bloomfield Road until 2014 before joining Sheffield United for free. He still plies his trade with the Blades aged 28.

Jason Euell had been there and done that by the time he arrived at Blackpool at in 2009. He was 33 at the time of the game, and had over 50 Premier League goals behind him. The forward was released after the Tangerines’ relegation and picked up by former club Charlton for a season. But after realising he could unfortunately no longer cut it with the Addicks or on loan at AFC Wimbledon, Euell retired in 2012. He is now the Senior Professional Development Coach at The Valley, working with the Under 18 and Under 21 squads.

It’s worth noting how 13 of the 14 players who featured at the DW Stadium were all let go for free by Blackpool. The one player who earned the Tangerines some money? Charlie Adam of course.

One thought on “Where Are They Now? Wigan 0-4 Blackpool”