February in the Premier League showed us that the title race might not be over just yet, the battle for a spot in the top four is set to be way more entertaining, as is the fight to avoid relegation, which now involves six teams aiming to retain their top-flight status.

What We Can See From The Table

Player of the Month

After finishing second to Tottenham team-mate Dele Alli in January, Harry Kane picks up February’s Premier League Player of the Month award from It’s Football Not Soccer. In a month where no player stood out to a massive degree, it was a difficult decision, but the 23 year old’s four goals and one assist earns him the accolade. He began the month by scoring the only goal in Spurs’ 1-0 win over Middlesbrough at White Hart Lane, albeit from the penalty spot, but it proved his coolness from 12 yards – Kane has missed just one of his last 13 spot-kicks for Tottenham in all competitions. A disappointing 2-0 defeat Liverpool followed, but after a break of 15 days with three cup games, Kane and Spurs came back with a bang against Stoke City. The North London side had beaten the Potters 4-0 in their two previous meetings, and it was no different here. Kane netted a hat-trick (an impressive third in nine games) – a well-taken finish into the bottom corner, an exquisite half-volley with his left foot and a low drive that took a big deflection – as well as setting up Alli for the other goal. It was a performance that led Mauricio Pochettino to remark “he’s one of the best strikers in the world”. The England international’s treble was his fourth in the Premier League for Spurs – no player in club history has registered more in the competition (Robbie Keane and Jermain Defoe both have three), whilst it also took him past 100 career goals.

Manager of the Month

There have been points during this season where it seemed as though the Premier League might be breaking the seemingly unbreakable Pep Guardiola in his maiden campaign in England, not least as his Manchester City side began 2017 with just one win in three January games to leave them fifth in the table. However, they’ve since turned things around with a run of three wins from three in February (making them the only team to achieve this) seeing them rise to third with a game in hand over second place Tottenham. The month began with a second thrashing of West Ham this season as they beat the Hammers 4-0 at the London Stadium. They left it late in a 2-1 win over Swansea City the following week, with January signing Gabriel Jesus the hero as he netted a brace. City’s final league fixture of the month actually came less than half way through it on February 13th against Bournemouth, and Raheem Sterling’s strike in the first half followed by a Tyrone Mings own goal in the second secured a 2-0 win on the South Coast. Is it too late to see a City title challenge? Guardiola won the league in his first season in charge of both Barcelona and Bayern Munich, and if they win their game in hand against neighbours Manchester United, his side will be eight points behind leaders Chelsea. It’s still a fair gap to try to make up, but certainly not impossible.

Goal of the Month

Game of the Month 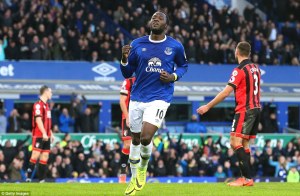 In Ronald Koeman’s 100th Premier League game, Romelu Lukaku helped himself to four goals as Everton extended their unbeaten Premier League run to seven games with a thrilling victory over Bournemouth at Goodison Park. Lukaku curled home an exquisite opener after just 30 seconds to equal the record for the fastest league goal of the season set by Chelsea’s Pedro against Manchester United. Lukaku’s trickery set up James McCarthy for Everton’s second before the Belgium striker doubled his tally when Simon Francis’ suicidal back pass gifted him the opportunity to loft the ball over Artur Boruc for a 3-0 half-time lead. Joshua King’s brace gave Bournemouth hope but Lukaku added two more inside the final 10 minutes to put the game to bed, although there was still time for Harry Arter to add a third for the visitors and Ross Barkley to slot in Everton’s sixth. Read the full BBC match report here.

Tony Pulis has seen a side under his management reach the 40-point mark in February within the Premier League for the first time ever, as seven points from a possible nine took West Brom on to that tally by the end of the month.

Games to look out for in March